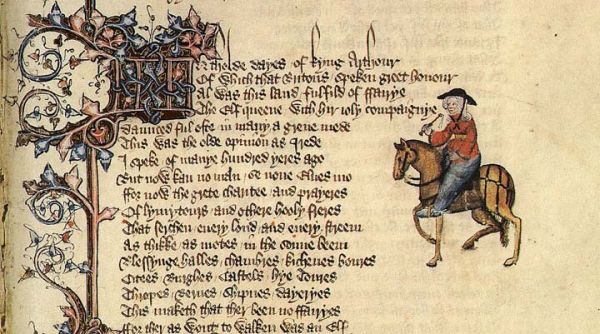 THE WIFE OF BATH’S PROLOGUE: RIASSUNTO IN INGLESE SVOLTO. The Wife of Bath is a storyteller who recites her autobiography, announcing at the beginning of the Prologue that “experience” will be her guide. She travelled around the world as a pilgrim, visiting Jerusalem, Boulogne, Rome, Santiago de Compostela and Cologne, and now she is doing another pilgrimage to Canterbury. Furthermore, she confesses that she got married five times and she had many lovers when she was young. The Wife is exactly what the medieval Church saw as a “wicked woman” and she is proud of it. She is wealthy, resourceful and an expert embroiderer and she usually wears extravagant clothes, including scarlet tights and very expensive leather shoes. She is described as “gap-toothed”, “red in hue” and “handsome”, having “large hips” and a “bold face”.
She says that three husbands of hers have been “good” and two have been “bad”. The first three were good, she admits, mostly because they were rich, old and submissive. She admits proudly to using her verbal and sexual power to bring her husbands to total submissions.

THE WIFE OF BATH’S TALE: RIASSUNTO IN INGLESE SVOLTO. In the days of King Arthur, the Wife of Bath begins, a young knight, overcome by lust and his sense of power, rapes a fair young maiden. King Arthur issues a decree according to which the knight must be brought to justice. The knight is condemned to death by decapitation, but Queen Guinevere asks the King to allow her to pass judgment upon him. The Queen gives the knight one chance to save his own life: if, within one year, he can discover what women want most in the world and report his findings back to the court, he will keep his life. On the contrary, if he cannot find the answer or the answer is wrong, he will lose his head.
The knight begins questioning every woman he meets, but every one of them answers differently. Some claim that women love money best, some look, some sex, some remarriage, some jolliness, some honour, some flattery and some say that women want to be free. Finally, some say that women most want to be considered discreet and secretive. Outside a castle in the woods, he sees twenty-four maidens dancing and singing, but when he approaches they disappear as if by magic, and all that is left is an old hag. The knight explains his problem to the hag, and she says she can answer the question but forces him to grant any favour she might ask of him in return. The Knight agrees. Arriving at the court, he gives the answer, saying that women most desire sovereignty over their husbands. All ladies agree the answer to be true, so the knight is free.
However, the old hag explains to the court the deal between her and the knight, so she publicly requests his hand in marriage. The knight reluctantly is forced to agree. On their wedding night, the hag is upset because her husband is repulsed by her. She reminds him that her look can be an advantage because she can be a loyal wife as no other man desires her. She asks him what he would prefer between an old ugly hug who is loyal, true and humble and a beautiful woman who can always be unfaithful. The knight answers by saying that the choice is hers, and she is very pleased. Consequently, she asks him to kiss her, promising both beauty and fidelity. The knight looks at the hug again, but now finds a young and lovely woman. They live happily hereafter.