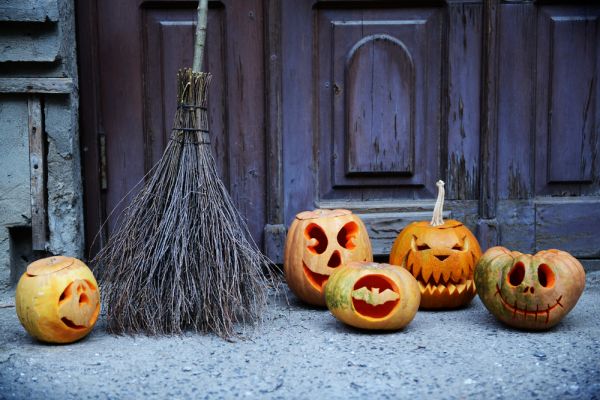 Blurring the line between life and death, darkness and light, fear and amusement, celebration and superstition, paganism and Christianity, Halloween is one of the most popular festivities all over the world nowadays.
Today, we celebrate October 31 with carved pumpkins, called Jack’ O lanterns, scary fancy dress, trick or treat according to the American traditions, but, as a matter of fact, Halloween has very ancient origins and has originated in Europe, particularly in Ireland.

Halloween’s origins date back to the ancient Celtic festival of Samhain (pronounced sow-in), so it is 2000 years old. The Celts lived mostly in Ireland, but also in the areas that are now the United Kingdom and northern France, and they celebrated their new year on November 1, when the summer season and the harvest period ended and the cold winter began.
On the night before new year’s day, i.e. October 31, they celebrated Samhain to keep the spirits away as they believed that the ghosts of the dead returned to earth in that night. It was also the best moment for the Druids (the Celtic priest) to make predictions about the future. Consequently, Druids built huge sacred bonfires, where the people gathered to burn crops and animals as sacrifices to the Celtic gods. During the celebration, they wore costumes made of animal heads and skins.
When the celebration was over, they re-lit their fires from the sacred bonfire so that they could help them during the winter season.

When the Roman Empire conquered the Celtic territory, two festivals of Roman origins – Feralia (the commemoration of the passing of the dead) and Pomona (when Romans celebrated the goddess of fruit and trees) – were combined with the Samhain. Later, Pope Boniface IV established the Catholic feast of All Martyrs Day on May 13, 609 A.D, but it was Gregory III who moved the festivity from May 13 to November 1. In 1000 AD, the Church added November 2 as All Souls’ Day, a day to honour the dead, maybe attempting to replace the Celtic festival. However, the celebration on All Souls’ Day was similar to Samhain, with bonfires, costumes and parades. The All Saints Day celebration was also called All-hollows or All-hallowmas and the day before began to be known as All-hallows Eve and, eventually, Halloween.
Halloween was brought to America in the second half of the nineteenth century, when millions of Irish fleeing Ireland’s potato famine of 1846 migrated to Canada and the USA. Taking from Irish and English traditions, Americans started to dress up in costumes and go house to house asking for food or money, a practice that evolved in the trick-or-treat tradition we celebrate today. They began to cave pumpkins, too, following the Irish tradition to make lanterns out of turnip. In the USA, indeed, it was easier to find pumpkins instead of turnips.

In the late 1800s, Halloween became a very popular celebration among the community and it was celebrated organising many parties for both children and adults. As parents were encouraged to take anything frightening or grotesque out of Halloween celebration, the feast lost most of its superstitious and religious traits. During the 1900s, Halloween turned into a consumerist holiday introducing horror, scary fancy dress, parties and traditional colours such as purple, orange and black.

Despite being a consumerist celebration, Halloween is still today one of the most charming feast, because of its mixed origins and traditions. It is a special occasion for those who just want to have fun, but also for who loves superstition and believes in magic. In the end, what is more intriguing for the human than being able, at least once a year, to make the boundary between life and death so blurred and believe that everything is possible?