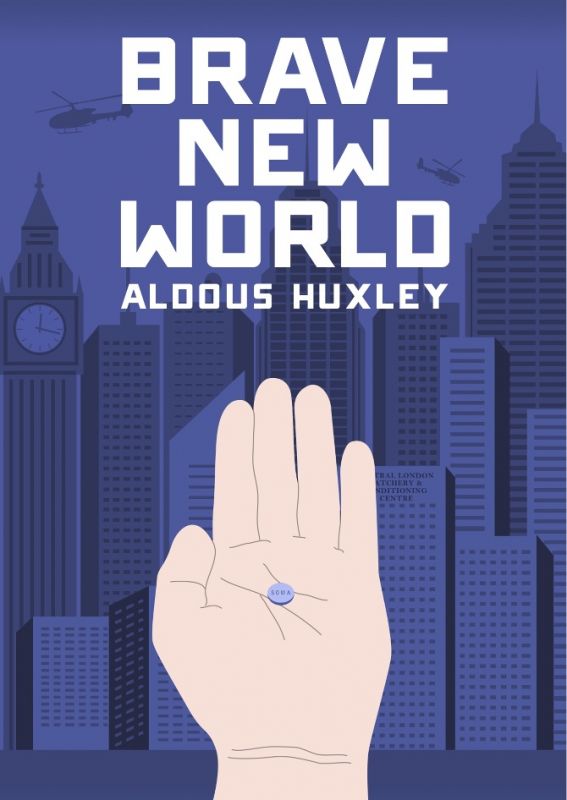 BRAVE NEW WORLD: RIASSUNTO IN INGLESE SVOLTO. The novel is set in London in AF 632 (AD 2540 in the Gregorian calendar) and it describes a society whose motto is “Community, Identity and Stability”. Following a terrible war lasted 9 years, the entire planet is brought under a sole State, ruled by ten World Coordinators. The main characters are Lenina Crowne, a hatchery worker who is socially accepted, and Bernard Marx, a psychologist in the Directorate of Hatcheries and Conditioning. Bernard is shorter in stature than the average of his Alpha caste, so he is not accepted and he has got an inferiority complex. However, his intelligence and his work allow him to understand and disapprove of the methods by which society is sustained. This is the reason why he is threatened with exile to Iceland. He has got just a friend, Helmholtz Watson, a lecturer at the College of Emotional Engineering. They both feel to be misfits in the society they belong, but unlike Bernard, Watson’s nonconformity comes from being exceptionally intelligent, handsome and strong.

RIASSUNTO IN INGLESE BRAVE NEW WORLD: LINDA E JOHN. Bernard and Lenina go on holiday at a Savage Reservation in New Mexico, where they observe ceremonies and rituals belonging to the village folk and they meet Linda, a woman from the World State who is living on the reservation with her son John. Linda visited the reservation on holiday too, but she was left behind by her group, so she stayed at the reservation. Here she became pregnant by another holidaymaker (who is revealed to be Bernard’s boss) and she refused to return to London because of her shame at her pregnancy. Yet, Linda and John aren’t accepted by the villagers, so John has grown up just reading Shakespeare and he is able to articulate his feelings only in terms of Shakespearian drama. Bernard, in order to avoid his exile, persuades Linda and John to go back to London, where Bernard is confronted by the Director. Bernard, though, presents him with his ex lover and unknown son: the Director, humiliated by being called “father”, resigns.

RIASSUNTO BRAVE NEW WORLD IN INGLESE SVOLTO: CONTRO IL SISTEMA. Bernard, who is now the custodian of the “savage” John, is treated as a celebrity, but his triumph is short-lived. Linda soon goes on a permanent soma (an ideal drug which eliminates pain), while John refuses to attend social events organised by Bernard, criticising this empty society where he now lives. Lenina and John are physically attracted to each other, but John’s view of courtship and romance, based on Shakespeare, is utterly incompatible with Lenina’s free attitude to sex. When John learns that his mother is very ill, he rushes to her bedside, causing a scandal because this is not the correct attitude to death.

BRAVE NEW WORLD DI ALDOUS HUXLEY, RIASSUNTO IN INGLESE SVOLTO: ESILIO. After trying to break up a distribution of soma, helped by Helmholtz, John, Bernard and Helmholtz are brought before Mustapha Mond, the Resident “World Controller for Western Europe”. Bernard and Helmholtz are exiled to islands as a punishment for antisocial behaviour. Helmholtz decides to go to the Falkland Islands, while Bernard asks for a second chance. Mond, however, says to Bernard that the exile is actually a reward because the islands are full of the most interesting people in the world, those who didn’t fit in World State Community. John wants to go the island as well, but Mon refuses: the man, thus, moves to an abandoned air-lighthouse, near Puttenham, where he intends to adopt an ascetic lifestyle in order to purify himself of civilization. He also practises self-mortification and self-flagellation becoming a show for people who go to the lighthouse to see his behaviour. One day, Lenina is among the witnesses, and John attacks her with his whip. Then, John is caught up in a soma-fuelled orgy with all the onlookers. The next morning, ashamed for what he has done, John hangs himself in the lighthouse.