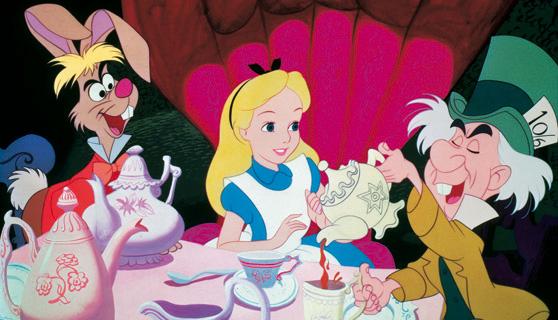 ALICE NEL PAESE DELLE MERAVIGLIE, RIASSUNTO IN INGLESE SVOLTO: CAPITOLI 1-3. While sitting on the riverbank with her sister, Alice, who is feeling bored, notices a White Rabbit wearing a waistcoat and a pocket watch and who seems in a hurry. She follows the animal down the rabbit hole, but then she suddenly falls into a deeper hole and she finds herself in a curious hall with many locked doors of all sizes. Alice notices a small door through which she can see a beautiful garden, but she is too big to go through it. Then, she discovers a bottle on a table labelled “Drink Me”: she follows the command and she shrinks too small to reach the key, which she has left on the table. She then eats a cake with “Eat Me” written on it and Alice grows so much that her head hits the ceiling. Alice is unhappy and she bursts into tears, flooding the hallway. Thanks to a fan she finds, Alice shrinks down again and swims through her own tears meeting a Mouse, who is swimming as well. The girl tries to speak to him in French, but the mouse misunderstands what she is saying and tries to escape her. The sea of tears becomes crowded with other animals, until they convene on a bank and they start arguing about how to get dry again.

ALICE NEL PAESE DELLE MERAVIGLIE, RIASSUNTO IN INGLESE SVOLTO: CAPITOLI 4-6. The White Rabbit appears again in search of the Duchess’s gloves and fan. Alice is invited to enter his house, but she starts growing too much again. The rabbit, who is frightened, calls Bill the lizard, his gardener, ordering him to climb on the roof and go down the chimney. The crowd outside the house, meanwhile, hurls pebbles at her, which turn into little cakes. Alice eats them, and they make her smaller again. Then Alice finds a mushroom; sitting on it, there is a blue Caterpillar smoking a hookah. The Caterpillar questions Alice and she admits she cannot remember a poem. Before crawling away, the Caterpillar tells her that one side of the mushroom will make her taller and the other side will make her shorter. She eats the mushroom: while her body shrinks, her neck grows high into the tree, and a pigeon mistakes her for a snake. After some failed attempts, Alice succeeds in bringing herself back to her normal height. Then, a frog lets herself into the Duchess’s house, where the Cook is throwing dishes and making a soup that has too much pepper: Alice, the Duchess and her baby sneeze violently and the baby turns into a pig. The Cheshire Cat appears in a tree, directing Alice to the March Hare’s house, and then disappears, but his grin remains behind to float on its own in the air.

ALICE NEL PAESE DELLE MERAVIGLIE, RIASSUNTO IN INGLESE SVOLTO: CAPITOLI 7-9. Alice becomes a guest at a “mad” tea party along with the March Hare, the Hatter, and a very tired Dormouse. The Hatter reveals that they have tea all day because Time has punished him eternally standing still at 6 pm, i.e. tea time. After a while, Alice leaves claiming that it was the silliest tea party she had ever been to and enters a garden, where she finds three living playing cards painting the white roses on a rose tree red because The Queen of Hearts hates white roses. Then, a procession of more cards, kings and queens and the Whit Rabbit enters the garden, and Alice meets the King and the Queen, a woman difficult to please, who yells “Off with her head!” at the slightest dissatisfaction with a subject. Alice is invited to play a game of croquet with the Queen, but the game, played with live flamingos, descends into chaos with the arrival of the Cheshire Cat. The Queen of Hearts then orders the Cat to be beheaded, but her executioner complains that this is impossible since the head is all that can be seen of him. The cat belongs to the Duchess, so the Queen let her release from the prison to solve the matter. After a while, though, she dismisses her with the threat of execution and then she introduces Alice to the Gryphon, who takes her to the Mock Turtle, who is very sad.

ALICE NEL PAESE DELLE MERAVIGLIE, RIASSUNTO IN INGLESE SVOLTO: CAPITOLI 10-12. Alice is involved in a game: while the Mock Turtle and the Gryphon dance to the Lobster Quadrille, the girl recites “Tis the Voice of the Lobster”. The Mock Turtle then sings them “Beautiful Soup” during which the Gryphon drags Alice away for an impending trial. The Knave of Hearts is accused of stealing the Queen’s tarts: the jury is composed of various animals, including Bill the Lizard, while the White Rabbit is the court’s trumpeter. During the proceedings Alice starts to grow larger and when she is called up as a witness, the King and The Queen of Hearts order her to leave, because she is too big. Alice, though, refuses to leave and she argues with them over the ridiculous proceedings. The Queen shouts “Off with her head!”, but Alice is unafraid and the cards start to swarm over her. Alice’s sister wakes her up from a dream, brushing what turns to be some leaves, and not playing cards.