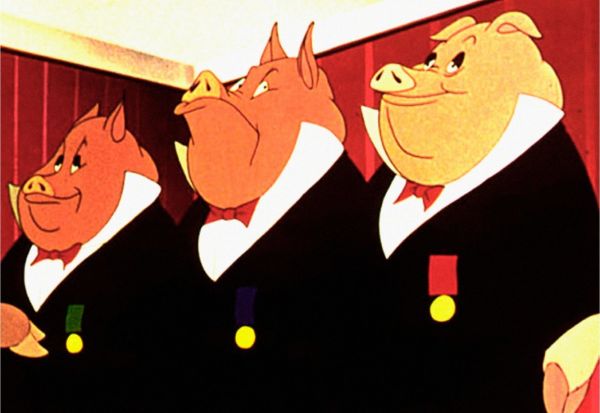 RIASSUNTO IN INGLESE DI ANIMAL FARM: LA RIBELLIONE DEGLI ANIMALI. The story is set in Mr Jones’s farm: he exploits his animals without mercy and he often mistreats them when he is drunk. One day, the old, wise, and respected boar of the farm, Old Major, tells his friends that he had a dream in which the animals were free from human beings and they were able to determine their fate. Everyone notices that, in the dream, the only animal that consumes without producing anything is the man, the real “enemy” of the animals. Then, Old Major teaches the animals a revolutionary song called Beasts of England. Unfortunately, the old boar suddenly dies three nights later. Three young pigs – Napoleon, Snowball and Squealer – assume command and consider it a duty to prepare the Rebellion. When a drunken Mr Jones forgets to feed the animals and to milk the cows, the animals revolt leaving their fenced areas, chasing the irresponsible Mr Jones away and renaming the farm “Animal Farm”.
Vuoi leggere il riassunto in italiano? La Fattoria degli Animali: riassunto

RIASSUNTO IN INGLESE DI ANIMAL FARM: GLI ANIMALI DELLA FATTORIA. The pigs, which led the revolution against the humans, become the rulers of the farm, and they start to dictate the other animals, which still believe in the Revolution beliefs. The most important characters are:

RIASSUNTO IN INGLESE DI ANIMAL FARM: LA DITTATURA DI NAPOLEONE. Napoleon and Snowball are the most powerful pigs and they struggle for pre-eminence. When Snowball announces his plans to build a windmill, Napoleon orders his dogs to chase Snowball away and to kill the animals that don’t agree with their new boss’s ideas. Napoleon is a dictator: he exploits Snowball’s ideas for his ends and based his power on the use of violence. He begins to adopt the lifestyle of a man and to purge the farm. Beast of England is replaced with an anthem glorifying Napoleon, but the animals remain convinced that they are better off than they were under Mr Jones. When Boxer is injured and he is no longer able to work, Napoleon sends for a van to take Boxer to the veterinary surgeon, explaining that better care can be given there. As a matter of fact, Boxer is taken to a knacker: only Benjamin, the donkey who can read “as well as any pig”, understands that the van doesn’t belong to a vet and attempts to rescue Boxer unsuccessfully.

RIASSUNTO IN INGLESE DI ANIMAL FARM: LA CONCLUSIONE. Now, Napoleon and the pigs behave like men: they stands on two feet, they drink whiskey, they trade with men, they wear clothes and they sleep in confortable beds. The ideals of the Revolution no longer exist and even the Seven Commandments are changed. Particularly, the 7th Commandment is modified as follows: “All animals are equals, but some are more equal than others”. He abolishes the practice of the revolutionary traditions and restores the name “The Manor Farm”. As the animals look from pigs to humans, they realise they can no longer distinguish between the two.