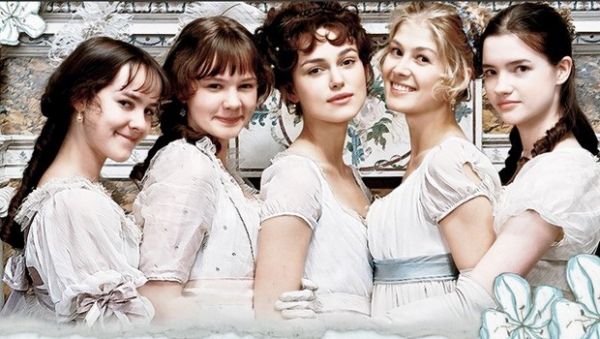 ORGOGLIO E PREGIUDIZIO: RIASSUNTO SVOLTO DI PRIDE AND PREJUDICE. Pride and Prejudice is focused on the Bennets, an English family consisting of Mr and Mrs Bennet and their five daughters of marrying age: Jane, Elizabeth, Mary, Kitty and Lydia. Particularly, the main character is Elizabeth (also called Lizzy) and the story follows the development of her relationship with Mr Darcy, but also the one between Jane and Mr Bingley and between Lydia and Mr Wickham. The novel is set in the Hertfordshire: the narrative opens with the news in the Bennet family that a wealthy young bachelor, Mr Bingley, is moving into his estate at Netherfield Park near Longbourn, where they live. Ms Bennet is excited because her main ambition in life is to marry her daughters off to wealthy men. Mrs Bennet is portrayed as a frivolous, gossipy and shameless woman, while her husband, Mr Bennet, is clever, ironic and fond of his two eldest daughters, Jane – who is good and sweet – and Elizabeth, more rational and sensible.
During a ball, the girls has the chance to make Mr Bingley’s acquaintance: Everyone likes him for his kind and polite personality and he seems very interested in Jane, so the two young guys spend the night dancing together and they look very happy. His two sisters and his close friend Mr Darcy, who appears to be snob, proud and unfriendly, accompany Mr Bingley.
Upon paying a visit to Mr Bingley’s sister Caroline, Jane is caught a heavy downpour, catching a cold, and she is forced to stay at Netherfield for five days. Elizabeth arrives to look after his sister and she often has arguments with Mr Darcy about the qualities a woman should have.
Later, Mr Collins, an obsequious clergyman and heir to Longbourn, pays a visit to the Bennets. He has come to Longbourn to choose a wife from the Bennet sisters and he directs his attention towards Elizabeth, who declines his proposal of marriage. Mr Collins, then, proposes to Elizabeth’s best friends, Charlotte Lucas, who accepts to marry him because, according to her, he is a good match. Elizabeth, instead, forms an acquaintance with Mr Wickham, a militia officer who claims having been mistreated by Mr Darcy despite having been Darcy’s father godson. This accusation increases Elizabeth’s dislike for Mr Darcy.
Meanwhile, when the announcement of the marriage between Jane and Mr Bingley is believed to be imminent, the man is forced to leave and go to London, followed by his sisters and Mr Darcy. Jane is persuaded by letters from Caroline Bingley that Mr Bingley is not in love with her, but Elizabeth becomes convinced that Mr Darcy and Caroline have plotted to separate him from Jane.
In the spring, Elizabeth visits Charlotte and Mr Collins in Kant. They live near Rosings Park, Lady Catherine de Bourgh’s home, so they are often invited there. Here Elizabeth meets Darcy, who is Lady Catherine’s nephew, and discovers that the man is responsible for Mr Bingley’s departure from Netherfield Park. While Elizabeth is very angry for this discovery, Mr Darcy proposes to her, but she refuses charging him with destroying the happiness of both her sister and Bingley, with treating Mr Wickham disgracefully and with having behaved towards her in an arrogant manner. The next day, Mr Darcy gives Elizabeth a letter in which he explains all his actions; thanks to this letter, Lizzy starts to change her mind about him.

Some months later, Elizabeth and her aunt and uncle Gardiner visits Pemberly, Darcy’s estate, believing he will be absent for the day. He returns unexpectedly and he treats the Gardiners and Elizabeth in a gracious and welcoming manner. Elizabeth begins to acknowledge her own attraction to him, but then she receives the news that Lydia has run off with Mr Wickham while she was in Brighton. Elizabeth returns to Longbourn and Mr Darcy, as soon as he knows about the incident, finds Lydia and Wichkam, pays all Wickham’s debts and persuaded them to marry, enabling the Bennet family to preserve decorum. Discovering what Mr Darcy did for her family, Elizabeth fells in love with him.
Finally, Mr Bingley and Mr Darcy return to Longbourn and Mr Bingley proposes to Jane, who accepts. Then, Lady Catherine de Bourgh pays an unexpected visit to Longbourn as she has heard a rumour that Elizabeth will marry Mr Darcy and she wants the girl not to accepts his proposal. Elizabeth refuses her demands. When Lady Catherine tells her nephew about Elizabeth’s refusal to promise not to marry him, Mr Darcy’s hopes are revived and he returns to Longbourn for renewing his proposal of marriage. This time, Elizabeth accepts and they get married.