The Rime of the Ancient Mariner, il riassunto in inglese 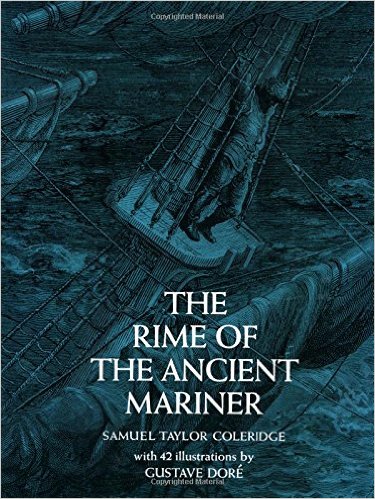 RIASSUNTO IN INGLESE THE RIME OF THE ANCIENT MARINER. Three young men are walking together to a wedding, but one of them is detained by an old sailor. The young man asks the Mariner to let him go, and the Mariner obeys. Yet, the wedding guest is transfixed by the Mariner’s glittering eye and can do nothing but sit and listen to his tale. The Mariner tells of a southbound voyage to the Antarctic: at the beginning it was a sunny day and the sea was cheerful; then, a giant storm rose up in the sea and the ship started descending toward the unknown, hammering inside a maze of ice. The sailors, though, encountered an Albatross, a large seabird, which flew around the ship e followed the men, after the wind from the south propelled the ship again into the water. The Mariner inexplicably shot it, sacrificing it which his crossbow. At first, the other sailors got furious with the Mariner for having killed the bird, symbol of good luck. However, when the fog lifted soon afterword, the sailors decided that the bird had actually brought the fog instead of the breeze. They now congratulated the Mariner. The wind pushed the ship into a silent sea, but then the wind stopped and the sailors on the ship start to be thirsty. The sailors blamed the Mariner and hung the corpse of the albatross around his neck like a cross. At last, a ship was sighted, but it was a skeleton ship, carrying two figures: Death and Night-mare Life-in-Death, a pale woman. The two began throw dice, and the woman won: she whistled three times, causing the sun to sink and the stars to emerge. The woman imposed a penance on the Mariner’s ship, which began with the death of the crew while the Mariner lives on, unable to die and even to sleep. When he was finally able to sleep, the ship sailed home, manned by spirits animating the crew’s corpses. Yet, the ship suddenly sunk, while the Mariner was rescued and absolved of his sins. Nonetheless, his need for penance remained, so the Mariner has been forced to wander endlessly and solitarily until an agony seizes him and he must tell his story to someone else. The wedding guest misses the marriage ceremony, but he has been changed for good by the Mariner’s words.

(Foto: The Rime of the Ancient Mariner; Courtesy of Gistave Doré)