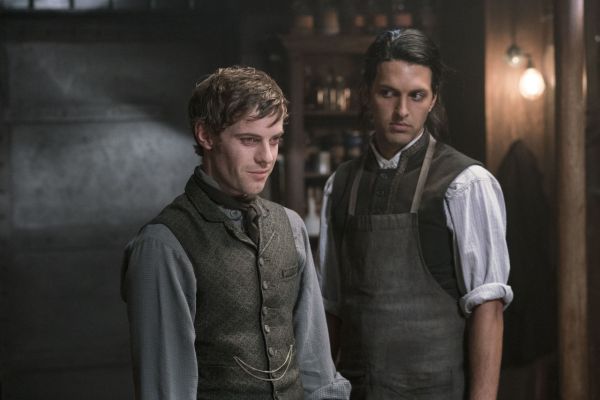 DR JEKYLL AND MR HYDE, RIASSUNTO IN INGLESE SVOLTO. Dr Jekyll and Mr Hyde is set in London and the narrator is Utterson, Doctor Jekyll’s lawyer and long-time friend. At the beginning of the story, Utterson and his cousin Richard Enfield reach the door of a large house on their weekly walk. Enfield tells Utterson that months ago he saw a sinister-looking and repugnant man trample a girl after accidentally bumping into her. Enfield was able to stop the man and forced him to pay the girl’s family to avoid a scandal. This mysterious man, whose name is Edward Hyde, paid by cheque, which was signed by a reputable gentleman, Dr Henry Jekyll. Utterson is disturbed because Jekyll recently changed his will to make Hyde the sole beneficiary. The lawyer is afraid Hyde is blackmailing Dr Jekyll, who, in the meantime, has been disappeared for three months. Wishing to understand what has been happening, Utterson gets in touch with Dr Hastie Lanyon, both Jekyll and Utterson’s friend. Lanyon tells Utterson that Hyde can enter the house and the med lab in the cellar all the times. Consequently, the lawyer keeps Dr Jekyll’s house under surveillance until he is able to see Mr Hyde: his repugnance upsets Utterson. Indeed, Mr Hyde is short and hunchbacked, hairy and violent. Dr Jekyll, though, reassures his friend about his relationship with Mr Hyde.

RIASSUNTO IN INGLESE DR JEKYLL AND MR HYDE: L’OMICIDIO. A year later, a murder is committed in London: Sir Danvers Carew, one of Utterson’s clients, is beat to death. Utterson leads the police into Hyde/Jekyll med lab and there they find the cane used as a murder weapon, but Mr Hyde is vanished. Jekyll explains to his friend that he has no longer any relationship with Hyde, giving to Utterson a letter wrote by Hyde himself. Utterson notices that the calligraphy is very similar to Dr Jekyll’s one. For two months, Jekyll reverts to his former sociable manner, but in early January, he starts refusing visitors. Dr Hastie Lanyon dies of shock after receiving information relating to Jekyll. Before his death, Lanyon gives Utterson a letter to be opened after Jekyll’s death or disappearance. Utterson and Enfield are more and more worried, and, during their weekly walk, they stop under Dr Jekyll’s house and they chat with him until he closes the window and hides in his apartment.

RIASSUNTO DR JEKYLL AND MR HYDE IN INGLESE: LA CONCLUSIONE. A week later, Richard Pool, Jekyll’s butler, visits Utterson and tells him that the doctor has secluded himself in his laboratory for weeks. Utterson and Enfield break into the laboratory, where they find Hyde wearing Jekyll’s clothes and apparently dead from suicide. They also find a letter for Utterson written by Jekyll. Utterson reads both Lanyon’s and Jekyll’s letter. Lanyon’s letter reveals his death resulted from the shock of seeing Hyde drink a serum that turned him into Jekyll. Jekyll’s letter, instead, explains that Jekyll finds a way to transform himself into Hyde, who was evil, self-indulgent and uncaring to anyone but himself. Initially, Jekyll was able to controlled the transformations with the serum, but one night, he became Hyde involuntarily in his sleep. Jekyll tried to cease becoming Hyde, but, another night, he drank the serum and Hyde, furious, killed Carew. Jekyll tried again to stop the transformations, but in January he turned into the man involuntarily while awake. Hunted by the police as a murderer, Hyde needed help to avoid capture, so he wrote to Lanyon, asking him to bring chemicals from his laboratory. Hyde drank the serum, transforming into Jekyll in front of Lanyon, who was so shock he died. Meanwhile, Jekyll’s involuntarily transformations increased: fearing he would become Hyde permanently, Dr Jekyll decided to kill himself.