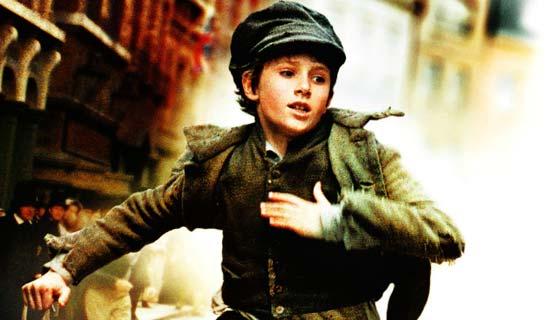 OLIVER TWIST RIASSUNTO IN INGLESE: L’INIZIO. In 1830, in the English countryside, a woman dies in a parish workhouse after giving birth to a baby. Mr Bumble, a beadle in the parish workhouse, baptises the baby and names him Oliver Twist. Old Sally, a nurse who attended Oliver’s birth, takes a ring and a locket from Oliver Twist’s mother. Oliver spends the first nine years of his life living at a baby farm in the care of Mrs Mann, then, Mr Bumble removes him from the baby farms and puts him to work at the main workhouse. In the workhouse, orphans are barely fed. One day, the desperately hungry boys decide to draw lots; the loser must ask for another portion of gruel. Oliver is in charge of asking for more food and at the next meal tremblingly comes up forward, bowl in hand, and begs Mr Bumble for gruel saying: “Please, sir, I want some more”.  Because of his behaviour, Oliver Twist is expelled from the workhouse and the board of well-fed gentleman who administer the workhouse offer £5 to any person wishing to take on the boy as an apprentice. Mr Sowerberry, an undertaker employed by the parish, eventually takes Oliver into his service. Even if he treats Oliver better, Mr Sowerberry’s wife doesn’t like the child, so she underfeeds and mistreats him. He also suffers torment at the hand of Noah Claypole, a bullying fellow apprentice. After a clash with Noah, who provokes him, Oliver flees to London.

RIASSUNTO IN INGLESE OLIVER TWIST: LONDRA. In London, Oliver lives as a homeless: he is hungry, dirty and tired. He meets a young boy, Jack Dawkins, who provides Oliver with a free meal and lodgings. Oliver follows the lad but Dawkins includes him in a gang of juvenile pickpockets whose leader is a Jewish criminal known as Fagin. Oliver realises that their mission is to pick pockets when Dawkins steals the handkerchief of an old gentleman named Mr Brownlow and flees. When Mr Brownlow realises that his handkerchief is missing, he turns around, sees Oliver running away in fright and pursues him. Eventually Oliver is caught and taken before the magistrate. Mr Brownlow, though, has second thoughts about the boy and Oliver is cleared thanks to a witness who saw Dawkins while committing the crime. Oliver, by now actually ill, faints in the courtroom and Mr Brownlow takes him home and cares for him with the assistance of his housekeeper Mrs Bedwin. Mr Brownlow is kind to him and provides him with education. Yet, one day, Oliver is kidnapped by Sikes and his girlfriend, a prostitute named Nancy, and they bring him back to Fagin. The criminal forces Oliver Twist to participate in a burglary. The robbery goes wrong, however, and Oliver is shot and wounded in his left arm at the targeted house. After being abandoned by Sikes, the wounded Oliver ends up under the care of the people he was supposed to rob: Miss Rob and her guardian Mrs Maylie. Oliver tells them and Doctor Losberne about his story.

OLIVER TWIST RIASSUNTO IN INGLESE: ALTRI PERICOLI. Yet, Oliver isn’t safe because Fagin wants him back in his gang and asks Monks for help. Monks is another criminal who has just discovered that Oliver Twist is his half-brother and the illegitimate child of one of Mrs Maylie’s sisters, so he could inherit a good fortune. Fagin and Monks wants to rob his fortune (Oliver knows nothing about the inheritance) and plot against him. Nancy, though, cares about Oliver and listening to Monks and Fagin’s plan she reveals it to Rose Maylie hoping to save the boy. Rose asks Mr Brownlow and Doctor Losberne for help. Bill Sikes kills Nancy because the gang is afraid she can report them to the police.
Meanwhile, Mr Bumble has married Mrs Mann Corney, the wealthy matron of the workhouse where the story began, only to find himself in an unhappy marriage. After one such argument, Mr Bumble walks over to a pub, where he meets Monks, who questions him about Oliver. Mr Bumble brings Monks to his wife, who now owns Oliver Twist’s mother's locket and ring. After Mrs Bumble told Monks all she knows, the three arrange to take the locket and the ring and toss them into a nearby river. Yet, Mr Brownlow, who was following Monks thanks to Nancy’s advice, succeeds in catching the criminal and their plan is discovered. Fagin is arrested and condemned to the gallows, while Sikes dies while running on the roofs. The Bumbles, instead, lose their jobs and falls into poverty.

RIASSUNTO IN INGLESE OLIVER TWIST: EPILOGO. Eventually, Oliver finds out the truth about his real identity: he is Agnes Fleming and Edwin Leeford’s son. Monks was his half-brother. In addition to it, Mrs Maylie is Oliver’s aunt. Monks, whose real name is Edward Leeford, was born of a loveless marriage between Edwin Leeford and his first wife. Oliver’s mother, Agnes, became his father’s true love after Monks witnessed his parent’s divorce. Edward Leeford’s last wish before dying was that Oliver Twist inherits his fortune. Yet, if his son had committed a crime while underage, his inheritance would have gone to Monks. This is the reason why Monks wanted to destroy Oliver’s reputation. Oliver is adopted by Mr Brownlow and receives his inheritance. Mr Brownlow, however, asks Oliver to give half his inheritance to Monks because he wants to give him a second chance and the boy is more than happy to comply. Monks later moves to America, where he squanders hi money, reverts to crime and ultimately dies in prison. Oliver lives happily with Mr Brownlow and all the members of Fagin’s gang, excluding Dawkins, become honest citizens.