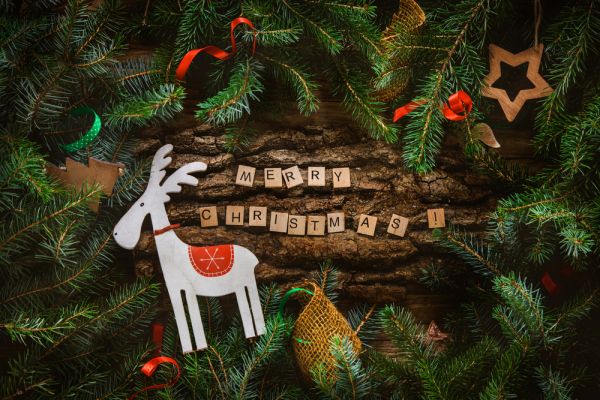 If you were asked to describe Christmas in the UK nowadays using just one word, it would be easy: consumerism. To be honest, a bright, fabulous, delightful consumerism.
In London, Christmas has been in the air since November, when Christmas lights are switched on in the main streets, Christmas markets and ice rinks crowd every corner of the capital, Christmas-theme events of all kinds are held and Oxford Street becomes a “Christmas” jungle where people fight to find the best gifts.

Yet, letting our cynical side go, the atmosphere in London is undoubtedly magic during Christmas time and British traditions to celebrate Christmas are very interesting and different from the celebrations we are accustomed to in Italy. In England less emphasis is placed on Christams Eve than in other countries: Carol singing, midnight church services or going out to the pub are some of the most common activities.
However, night time on Christmas Eve is very exciting for children, because it is the time when Santa (also knows as Father Christmas) comes. English children write letters to Santa, but they burn them in the fireplace instead of sending them by mail to the North Pole as the Italian kids do. According to the legend, Father Christmas is able to read the chimney smoke, so he can understand children’s requests. A lovely tradition is celebrated on 7th December, known as the National Letter Writing Day: everyone is asked to write a handwritten letter and to send it to a dear relative or friend. Father Christmas never shows himself, so he leaves the presents into the stockings children hung up to their bad at night. Traditionally, on Christmas Eve, mince pies and sherry (or milk) are left our for Santa.

On Christmas Day, British families gather for lunch. The most traditional dish is roasted turkey with all the trimmings, i.e. carrots, peas, sausages and bacon. Turkey is served with bread sauce, a worm or cold savoury sauce which is thickened with bread. Among the ingredients, there is milk, black pepper, cloves, onion, butter, cream or mascarpone and nutmeg.
According to an old tradition, eating Brussels sprouts makes people lucky (as lentils in Italy). The main course is usually followed by Christmas pudding, a rich fruit pudding served with brandy sauce or brandy butter. On Christmas Day (or Crimbo, as it is called colloquially), people have fun with Christmas Crackers: they are small cardboard tube covered in brightly coloured twist of paper. When the cracker is ‘pulled’ by two people, each holding one end of the twisted paper, the friction creates a small explosive ‘pop’ produced by a narrow strip of chemically impregnated paper. Inside the cracker there is usually a tissue paper hat, a balloon, a slip of paper with a very corny joke on it.

The following day, 26th December, it’s Boxing Day: in the past, wealthy people used to give gifts to tradesmen, servants and poor on this day. Nowadays, it is still a public holyday and we celebrate the beginning of winter sales!

The differences with the Italian Christmas celebration are many, but, in the end, Christmas Day is dedicated to family, to eat and to exchange presents.