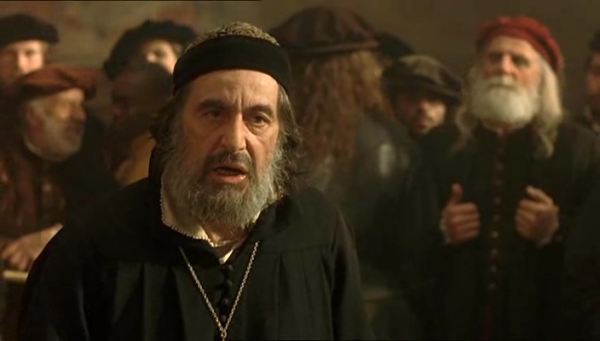 THE MERCHANT OF VENICE, RIASSUNTO IN INGLESE: ATTO I. The Merchant of Venice is a play consisting of five acts and it is set in Venice in the 16th century. Bassanio is a young Venetian gentleman who wants to marry Portia, a wealthy heiress of Belmont. In order to court her, Bassanio asks Antonio, the Merchant of Venice, for 3,000 ducats. Antonio agrees, but, as he has no cash because his ships and merchandise are busy at sea, he promises to cover a bond if Bassanio can find a lender. The man turns to the Jewish moneylender Shylock: despite the fact that Antonio hates Shylock and the Jewish loathes the merchant because he lends money without interest, Shylock agrees to land money to Bassanio, recognising Antonio as the loan’s guarantor. Yet, Shylock set one condition: if Bassanio is unable to repay the loan at the specified date (three months), Shylock may take a pound of Antonio’s flesh. Bassanio doesn’t want Antonio to accept, but the merchant accept the risky condition, being sure his ships will come back with lots of money.

RIASSUNTO IN INGLESE IL MERCANTE DI VENEZIA: ATTO II. Meanwhile, The Prince of Morocco goes to Belmont to court Portia, hoping that for her the skin colour is not a problem. Portia, however, explains him that his father left a will stipulating each of her suitors must choose correctly from three caskets, one each of gold, silver and lead. If he picks the right casket, he can marry Portia. The Prince of Morocco chooses the gold casket, while the second suitor chooses the silver casket, but both of them pick the wrong casket. At Venice, Shylock’s daughter, Jessica, leaves her father and merry a Christian, Lorenzo, who is Antonio and Bassanio’s friend. Furthermore, the girl brings with her 2,000 ducats and a turquoise ring which Shylock had been given by his late wife, Leah.

RIASSUNTO THE MERCHANT OF VENICE: ATTO III. Bassanio is the third suitor arrived in Belmont to court Portia. He picks the last casket available, the lead one: it is the right one, so he has the right to marry Portia, who is happy because she has already been fallen in love with him. Furthermore, Bassanio’s friend Gratiano wants to marry Portia’s handmaid Nerissa. Portia gives Bassanio a ring as a proof of love, asking her future husband not to lose it: he promises he will wear it until he dies. Meanwhile, Shylock is furious because of his daughter’s escape, thinking Antonio convinced her to marry Lorenzo. Discovering that Antonio has lost his ships at sea and he cannot repay the bond, Shylock brings Antonio before court to get his pound of flesh. Bassanio receives a letter telling him Antonio has been unable to repay the loan from Shylock. Portia and Bassanio marry, as do Gratiano and Nerissa. Then, the men leave for Venice, with money from Portia, to save Antonio’s life by offering the money to Shylock. However, Portia and Narissa decide to go to Venice too in disguise in order to help their husbands. Meanwhile, Jessica converts to Christianity.

RIASSUNTO IN INGLESE THE MERCHANT OF VENICE: ATTO IV. Antonio is before the court. The Duke of Venice is worried about Antonio’s fate and tries to persuade Shylock to show mercy, but the moneylender still demands his pound of flesh from Antonio. He also refuses Bassanio’s offer to 6,000 ducats, twice the amount of the loan. A visitor enters in the court: he is Balthazar, a young male doctor of law, bearing a letter of recommendation to the Duke from the learned lawyer Bellario. The doctor is Portia in disguise, and the law clerk with her is Nerissa, also disguised as a man. Balthazar/Portia grants Shylock his bond and Antonio prepares for Shylock’s knife. Yet, Portia objects that he would need a surgeon in order to cut Antonio’s flesh. Furthermore, she says that the contract allows Shylock only to remove the flesh, not the blood, of Antonio. According to Venetian laws, Shylock cannot shed any drop of Antonio’s blood, so he must cut precisely one pound of flesh, no more, no less, without making him bleed. Defeated, Shylock accepts Bassanio’s offer of money. At this point, Portia cites a law under which Shylock, as a Jew and therefore a foreigner, having attempted to take the life of a citizen, has forfeited his property, half to the government and half to Antonio, leaving his life at the mercy of the Duke. The Duke pardons Shylock’s life, but he has to sign a contract with which he must covert to Christianity and bequeath his entire estate to Lorenzo and Jessica. Bassanio doesn’t recognise his disguised wife, but offers to give a present to the lawyer. Portia requests his ring and, even if reluctantly, Antonio gives it to the lawyer. Narissa, too, as the lawyer’s clerk, succeeds retrieving her ring from Gratiano.

IL MERCANTE DI VENEZIA DI SHAKESPEARE, RIASSUNTO IN INGLESE: ATTO V. At Belmont, Portia and Narissa ask their husbands their rings and, when they try to explain what happened, they accuse them, before revealing they were really the lawyer and his clerk in disguise. Meanwhile, Antonio learns from Portia that his ships were not stranded and have returned safely.