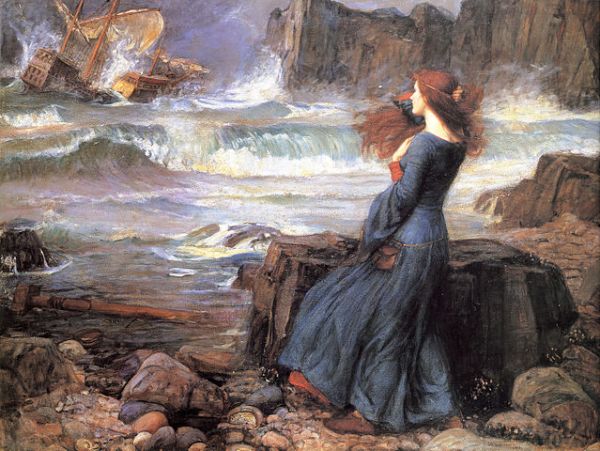 THE TEMPEST: RIASSUNTO IN INGLESE DE LA TEMPESTA SVOLTO. The Tempest opens when most of the events have already occurred: in the midst of the storm, we see a ship containing the King of Naples and his party while trying to stay afloat. On land, Prospero, a wizard, and his daughter Miranda watch the storm and the struggling ship: Prospero has created the storm with magic because his enemies are on board the ship. According to Prospero’s tale, he is the rightful Duke of Milan, who was betrayed by his brother, Antonio. Twelve years earlier, Antonio, with King of Naples’s help, deposed Prospero and put out him and his daughter to sea. Miraculously, they both survived and arrived safely on an island, where Prospero was able to control his magic that he now uses to manipulate everyone on the island. Upon his arrival, Prospero rescued a sprite, Ariel, who was trapped in a tree by the African witch Sycorax, exiled to the island years earlier and dead before Prospero’s arrival. Ariel is now his servant. On the island, there is also Caliban, whom Prospero has enslaved. Caliban is Sycorax’s mortal and uncivilized son, who wants to have his island back so that he can live alone in peace.

RIASSUNTO IN INGLESE THE TEMPEST DI SHAKESPEARE: IL NAUFRAGIO. Soon the storm wrecks the ship and people on board are separated into three groups. The king’s son, Ferdinand, is cast ashore and Prospero finds him. Ferdinand, as soon as he sees Miranda, falls instantly in love with her (and Miranda with him). Alonso, the King of Naples, and his crew, instead, come ashore on another part of the island. The king fears that Ferdinand is dead and grieves for the loss of his son. On the ship, there was also Antonio, Prospero’s younger brother, and Sebastian, the King’s younger brother. They arrived on the island together and Antonio persuades Sebastian he should murder his brother and seize the throne for himself, in the same way Antonio plotted against his brother Prospero. Finally, the court jester and the butler respectively named Trinculo and Stefano come ashore. They meet Caliban and the group gets drunk. While drinking, Caliban plots to murder Prospero with the help of his new two acquaintances. However, Ariel is listening and reports the plot to Prospero.

RIASSUNTO IN INGLESE DE LA TEMPESTA SVOLTO: LA VITTORIA DI PROSPERO. Ferdinand and Miranda spend some time together and declare their love, so Prospero stages a masque to celebrate the young couple’s love. Meanwhile, Alonso and the rest of the royal party have been searching for Ferdinand; Prospero has ghosts and an imaginary banquet brought before the king’s party. A god-like voice accuses Antonio, Alonso and Sebastian of their sins, and the banquet vanishes, so the men run away frightened. Prospero punishes Caliban, Trinculo and Stefano for plotting his murder. Then, Prospero appears on stage clothed as the rightful Duke of Milan and Alonso rejects all claims to Prospero’s dukedom and apologises for his mistakes. Prospero, then, reunites him with Ferdinand and Alonso is happy to know his son will soon get married with Miranda. Antonio, instead, has no regrets or apology; Prospero, though, decides not to punish Antonio as a traitor, while Caliban tells the Duke he has learned his lesson. In the end, Prospero tells the audience that only with their applause he will be able to leave the island.